Design of an Alarm System Using a Thermoelectric Generator 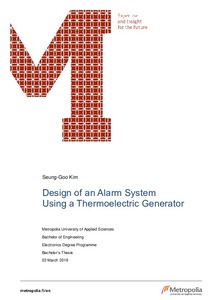 Seung-Goo, Kim
All rights reserved. This publication is copyrighted. You may download, display and print it for Your own personal use. Commercial use is prohibited.
Näytä kaikki kuvailutiedot
Julkaisun pysyvä osoite on
https://urn.fi/URN:NBN:fi:amk-201904114877

The goal of this project was to design a prototype that would operate by itself to detect
wildfires in the deep forest. The device doesn’t need a dependent power source or people
to manage this device. The operation principle of this prototype would be to use some components such as a thermoelectric generator (TEG), an IR sensor, and a communication terminal. Put simply, even though there is no dependent power source (like a battery, electric wire) in the deep forest, it would be able to operate by itself using voltage from a TEG. The IR sensor would operate using voltage from the TEG, detect the temperature, and send an alarm message, if a wildfire were to break out in the forest. This prototype was developed using Arduino Uno with C code for microcontroller and the boost-converter evaluation module was used for amplifying the voltage to operate Arduino
Uno. The main task to be solved by conducting this thesis work is to generate voltage using a TEG and transmitting the message. Therefore, the prototype was successful in relation to the first objective of the project. Finally, the overall objective of this paper is to contribute to the design of an alarm system that can be used to prevent big wildfires from developing.