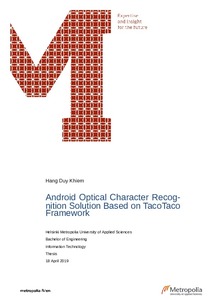 The thesis aims to provide a comprehensive analysis to ascertain if the framework can perform well against a different concrete use case. This was achieved by building an Android application using the framework as its base.

Optical Character Recognition (OCR) is a technology used to transfer text from one media to another, e.g. from paper to a digital format. Even though the technology has been around for almost a century, its recent surge in popularity stemmed the invention of smartphones. Thus, it serves as a reliable use case for the application. Because of its versatility and accuracy, the Tesseract OCR engine was chosen as the fundamental upon which the application is built.

It is concluded from the application that TacoTaco fits for general usage and that the OCR results from Tesseract are decently collected. However, more comparison with other frameworks and OCR engines, as well as in-depth performance optimization, would be a good addition to further verify their usages.