Developing a Hybrid Application for Connecting Startups and Investors 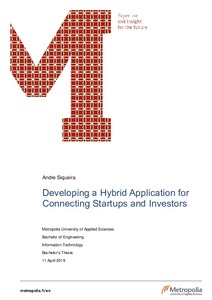 Siqueira, Andre
All rights reserved. This publication is copyrighted. You may download, display and print it for Your own personal use. Commercial use is prohibited.
Näytä kaikki kuvailutiedot
Julkaisun pysyvä osoite on
https://urn.fi/URN:NBN:fi:amk-201904266131

The employment of mobile applications can create new business possibilities and has a significant potential to improve the business process regarding connection, time, flexibility and cost. The paramount goal of this project was to create a viable platform where startups and investors could be connected straightforwardly under one application. Furthermore, the type of the application was hybrid, which is a combination of native and web application, due to its benefits and development costs.
The technology stack, which was used on the project, consisted of two parts: client and server-side. The client-side was developed by using a hybrid mobile application development platform called Monaca, which employs Onsen UI, HTML5, CSS, JavaScript as development tools. The latter was developed by using Node.js, which was designed to build scalable network applications, and MongoDB, which is a document database.
Conclusively, the Touko application was successfully developed and passed to the test phase. Moreover, a trial version of the application was published on Apple Store and Google Play, and a marketing campaign was launched to increase the number the users.