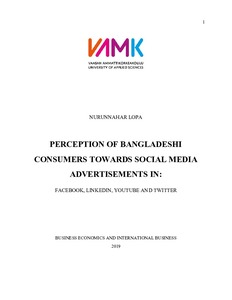 Nurunnahar, Lopa
All rights reserved. This publication is copyrighted. You may download, display and print it for Your own personal use. Commercial use is prohibited.
Näytä kaikki kuvailutiedot
Julkaisun pysyvä osoite on
http://urn.fi/URN:NBN:fi:amk-201905027225

The number of internet users in Bangladesh is rising faster than ever before. This rise can be traced back to several determinants including easy access to the internet and the low cost of internet access and so on. For example, this rise and others factors that is already patronized when have created an environment to evolve advertisements through social media. The Basic four social media platforms where the advertisements appear in these Facebook, LinkedIn, YouTube and Twitter. The aim of this thesis was to explore perceptions towards social media advertisements within these four media domains. As we know in psychology, perception is a complicated phenomenon, the trace of it must be what. To avoid such complication, two research papers were taken as basement and this paper had made an attempt to explore perception regarding advertisements through social media. These two scholarly works are the works led by Pollay and Wolin consecutively. The model that had been used here can be named as “Seven Factor Belief” model. In short, this thesis made an attempt to trace the perception regarding social media advertisements of consumers and this study solely focused on Bangladesh. The findings of this paper are centered to the paradigm shift of advertising of Bangladesh and it has been clearly illustrated these four sectors of advertising have become how unclear. Bangladesh has already reached the stage where the influence of social media is not negligible and the perception regarding this sector of advertising is becoming how with the passage of time.