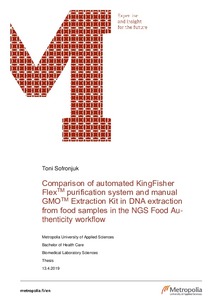 Sofronjuk, Toni
All rights reserved. This publication is copyrighted. You may download, display and print it for Your own personal use. Commercial use is prohibited.
Näytä kaikki kuvailutiedot
Julkaisun pysyvä osoite on
http://urn.fi/URN:NBN:fi:amk-201905088376

The food fraud is a growing problem globally. The purpose of this study was to find out if automated KingFisher™ Flex Purification System is equivalent to manual spin column GMO™ Extraction Kit method in DNA extraction from different food samples in the NGS Food Authenticity workflow. The second goal was to find out if there are differences in sequencing quality with Ion GeneStudio™ S5 System between the two DNA extraction methods. The study was performed in the facilities of Thermo Fisher Scientific Oy, Vantaa.

In the study 48 different fish, meat and plant food products from five categories were homogenized and DNA was extracted as three replicates with both protocols. DNA concentrations were measured with Qubit® 4 Fluorometer and the sample with the highest concentration from each protocol was chosen for targeted amplicon PCR amplification by applying All Species ID kit. Amplified samples were run on Agilent 4200 TapeStation electrophoresis and based on the intensity of the bands libraries were assembled together as three library pools. The library pools were purified with AMPure XP beads and the concentrations were measured with Qubit® 4. Library pools were enriched and loaded on the Ion 530™ chips in the Ion Chef™. The chips were analysed in the Ion Genestudio™ S5 sequencer and the generated FASTQ files were analysed with SGS’s All Species ID Software. Eventually the Qubit® and NGS results of the two DNA extraction protocols were compared to each other.

In overall DNA extraction results were comparable between the KingFisher™ Flex and GMO™ Extraction Kit. The dispersion between Qubit® results were more dependent on separate products than food categories. In the sequencing KingFisher™ Flex protocol performed well in the meat and fish products and moderately in the plant products compared to GMO™ Extraction Kit protocol. Despite some of too low Qubit® measurements of both DNA extraction methods 76 % of too low Qubit® results produced a sequencing result. Very small amount of extracted DNA is so needed for high quality sequencing result. Altogether the automated KingFisher™ Flex method is a valid alternative to the manual GMO™ Extraction Kit method in the NGS Food Authenticity workflow for species identification and food authenticity. KingFisher® Flex reduces approximately twice the hands-on-time compared to GMO™ Extraction Kit and possibly reduces the risk of cross-contamination in the DNA extraction process. Further research and development should be focused on the complex plant products and the handling, homogenization and lysis processes of food samples.