Co-defining Roles and Responsibilities for Interaction in a Business Environment 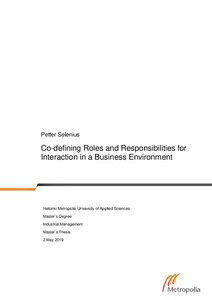 Selenius, Petter Kristian
All rights reserved. This publication is copyrighted. You may download, display and print it for Your own personal use. Commercial use is prohibited.
Näytä kaikki kuvailutiedot
Julkaisun pysyvä osoite on
https://urn.fi/URN:NBN:fi:amk-201905098565

In this study, the Design research approach and a mix of qualitative and quantitative research methods were used due to the complex and specific features of the research problem. The research design of this Thesis consisted of four steps. First, a literature review was done after which the current state analysis was done using a tool from the literature as a second step. The third step was done collectively which yielded a co-defined initial proposal which was fortified by concepts for improving interaction also from the literature search. The initial proposal was assessed and validated in the fourth and final step. The data was collected by workshops with the relevant stakeholders and their common manager present.

This study showed that the stakeholders did have differences in how they see the roles of
the other stakeholder in the daily tasks of the department. The most unclear role seemed to be the Sales Manager’s role. Based on the conceptual framework developed from the literature review, the aligned roles and responsibilities for interaction and the co-defined proposal for improving interaction were defined for the case department.