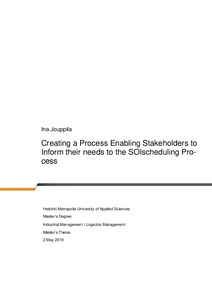 Jouppila, Ina
All rights reserved. This publication is copyrighted. You may download, display and print it for Your own personal use. Commercial use is prohibited.
Näytä kaikki kuvailutiedot
Julkaisun pysyvä osoite on
http://urn.fi/URN:NBN:fi:amk-201905098601

The objective of this thesis was to create a process enabling all stakeholders to inform their needs to the SOIscheduling process, which is used to plan the work of a production stage at the case company. This was done by finding out what kind of needs there are with different stakeholders, who has the highest authority in deciding priorities and how the correct priorities can be brought to the production planners daily and most efficiently.

The final outcome was a process flowchart with supporting document of CARS chart and
base instructions for creating the SOIschedule.

The proposal was tested in the current process, validated and after a few changes made
from feedback approved for implementation. The SOIscheduling process has helped the
case company to increase their output of oxidation gravely. With process documentation,
clear roles and responsibilities and transparent prioritizing the process is able to evolve and secure even better output in the future.