Rationalization of Product Configurator Output : In the Context of the Case Company 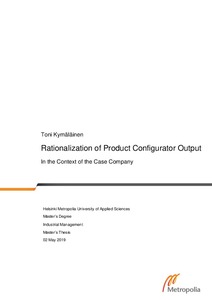 Kymalainen, Toni
All rights reserved. This publication is copyrighted. You may download, display and print it for Your own personal use. Commercial use is prohibited.
Näytä kaikki kuvailutiedot
Julkaisun pysyvä osoite on
http://urn.fi/URN:NBN:fi:amk-201905098632

The objective of this study was to rationalize the product structures extracted from the product configurator. Rationalized product structures extracted from the configurator enable easy and understandable comparison of existing products. Well-rationalized product structures are expected to minimize complexity in the company internal operations and provide transparency towards the customers. Eventually, the number of profitable sales is also expected to increase.
This study was conducted in five steps. First, the objective was defined. Second, the current state analysis was performed, which summarized the identified strengths and weaknesses of the current practices related to product structures. Third, literature review and the search for best practice was conducted. This resulted in the conceptual framework as a tool to approach the proposal building. Fourth, an initial proposal was built based on the previous steps and the key stakeholder input. Finally, after validation this proposal was finalized.
The study indicated that the functionality of already existing system tools were applied rather poorly in the case company. With relatively minor modifications in the existing product configurator, significant results may be achieved in terms of transparency and good command of product management.
The resulting proposal, a Configurator output generator, will be implemented to the case company. The initial proposal has already showed the potential which is achievable immediately after the implementation. Improved efficiency, transparency and possibilities to further develop the proposal are expected to differentiate the case company from the competition. Easily configurable and understandable products are also expected to fit most likely to the desired application of the customer.