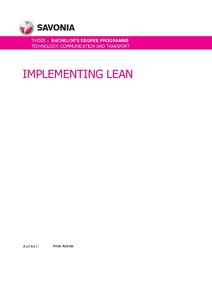 Kuisma, Anna
All rights reserved. This publication is copyrighted. You may download, display and print it for Your own personal use. Commercial use is prohibited.
Näytä kaikki kuvailutiedot
Julkaisun pysyvä osoite on
http://urn.fi/URN:NBN:fi:amk-201905109181

The topic of this thesis is implementing Lean thinking at PCM Technology Oy. The aim was to identify
problems within the company, and to address them with Lean tools. This thesis describes their current
continuous improvement tools and makes suggestions on how to build upon them.
The thesis includes a theory part, where the general history of Lean is presented, and the considered
tools are introduced. Lean literature was referenced for the Lean methods, as well as Lean consultants’
websites.
The practical part of this thesis follows using some of the Lean tools, such as the 5S system as well as
the Kanban cards that were implemented in the spare part storage. Stakeholders, such as maintenance
workers, engineers and production manager were consulted while making changes to the spare part
storage. Microsoft Excel VBA was used to make a system to help the production manager re-purchase
parts when needed, and the Kanban cards notify the production manager when parts need to be replenished.
The system has brought order to the spare part storage area and has already been improved upon
while in use in the company.