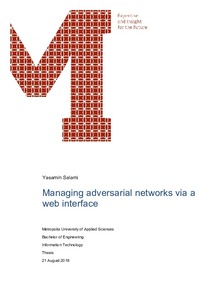 Salami, Yasamin
All rights reserved. This publication is copyrighted. You may download, display and print it for Your own personal use. Commercial use is prohibited.
Näytä kaikki kuvailutiedot
Julkaisun pysyvä osoite on
https://urn.fi/URN:NBN:fi:amk-201905139498

Recently generative adversarial networks are becoming the main focus area of machine learning. It was first introduced by Ian Goodfellow in 2014. The structure of GAN consists of two neural networks, which are constantly competing with each other: generator and discriminator. One learns to produce fake samples similar to the training data and the other tries to differentiate between fake and real data samples. The goal is to train the discriminator using samples from a known dataset until it reaches a good level of accuracy. Training GANs are challenging and can be time taking, but the result is quite impressive. GANs are being used in many industries, for instance, games, films, and medicine and for any distribution of data such as images, music and speech.