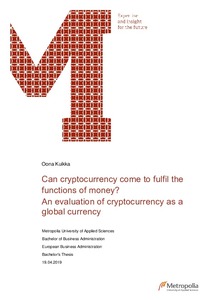 Kuikka, Oona
All rights reserved. This publication is copyrighted. You may download, display and print it for Your own personal use. Commercial use is prohibited.
Näytä kaikki kuvailutiedot
Julkaisun pysyvä osoite on
http://urn.fi/URN:NBN:fi:amk-2019052110926

The research presented in this paper covers the developments regarding cryptocurrency in an attempt to understand the virtual currency’s role in monetary history, specifically with the intention of developing an in-depth understanding of cryptocurrency’s ability to function as money. The research uses a holistic approach towards understanding cryptocurrency’s adoptability as a global currency, by examining the intrinsic internal qualities within cryptocurrency as well as external influences such as regulation, public acceptance and technological as well as economic changes that may bring about the virtual currency’s incorporation into the global economy. The benefits of cryptocurrency as money are evaluated, along with the limitations and some specific risks involved with it. The research concludes that there are various significant technological benefits in utilizing blockchain based currency systems, which may come to be incorporated into the global economy, and that there is a need for the modernization of present payment systems coinciding with technological advancement. A form of cryptocurrency could fill in the gap, or rather the benefits of blockchain may be incorporated into a new form of virtual currency which is centralized as opposed to the decentralized cryptocurrency. The possibility of a form of virtual blockchain-based currency emerging as a parallel currency functioning alongside fiat currency remains to be a moderately strong possibility, depending on the direction of technological, societal and economic developments. However, it is unlikely cryptocurrency would emerge to replace fiat currency in the foreseeable future.