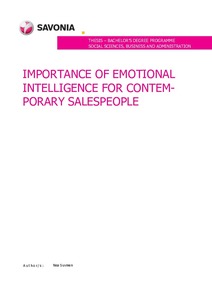 Suvinen, Nea
All rights reserved. This publication is copyrighted. You may download, display and print it for Your own personal use. Commercial use is prohibited.
Näytä kaikki kuvailutiedot
Julkaisun pysyvä osoite on
https://urn.fi/URN:NBN:fi:amk-2019052211238

Old operating models for businesses are no longer working in a constantly developing world. Nowadays pressuring business culture makes social skills more crucial than ever. In addition, salespeople are not only expected to be able to sense their customers’ feelings, but also to empathize with other people. Emotional intelligence, a common core of personal and social competencies, is considered one of the most crucial factors of intelligence of today. In my thesis, the primary aim is to either confirm of reject the hypothesis “nowadays salespeople need to possess high emotional intelligence”.

At the beginning of the research, the hypothesis was established. The theoretical part discusses of emotional intelligence and sales psychology. The research was implemented by following the principles of a quantitative research method. Primary data was collected through a survey executed by a questionnaire addressed to the salespeople of the case company. The questionnaire was used in order to discover which emotional skills are possessed by the sellers of the case company. Forty answers from the pool of fifty respondents were gathered in one and half week.