Nurses’ Utilization of Guidelines on Physical Restriction in Neurological Wards 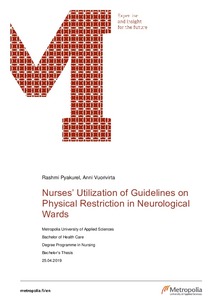 
Pyakurel, Rashmi
Vuorivirta, Anni
All rights reserved. This publication is copyrighted. You may download, display and print it for Your own personal use. Commercial use is prohibited.
Näytä kaikki kuvailutiedot
Julkaisun pysyvä osoite on
http://urn.fi/URN:NBN:fi:amk-2019052311607

The purpose of this thesis was to describe the utilization of the guidelines on physical restriction in four neurological wards in HUS Helsinki University Hospital. The aim is to use the knowledge received to develop nursing in neurological wards.

The data collection method was a questionnaire including 18 statements in four dimensions, namely implementing physical restriction, observing the patient, documentation and alternatives for using physical restriction. Each statement was followed by an answer option of I have used it – I have not used it – I do not know about this statement. There is a care guideline on physical restriction in use in HUS Helsinki University Hospital neurological and neurosurgical wards. The dimensions and statements in the questionnaire were directly based on this guideline. Out of 38 answer papers received 33 were included in the study. The data was analyzed by using descriptive statistical method.