E-Sports in Finland : Current Status and Prospects for Development 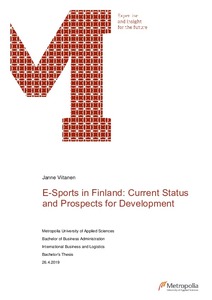 Viitanen, Janne
All rights reserved. This publication is copyrighted. You may download, display and print it for Your own personal use. Commercial use is prohibited.
Näytä kaikki kuvailutiedot
Julkaisun pysyvä osoite on
http://urn.fi/URN:NBN:fi:amk-2019052411684

The aim of this study is to outline the global growth of eSports (also known as electronic sports or competitive video gaming) and investigate the current situation of Finnish eSports. The research was carried out by researching current literature within the project domain which included existing literature, online databases, online publications and web pages.

The eSports industry has enjoyed from phenomenal growth in all aspects of eSports; revenue, audience size, tournaments prize pools and the amount of tournaments. In just five years the industry has grown from under $200 million revenue to $1 billion revenue industry and the growth is expected to continue. Usually eSports sponsors have been the likes of gaming hardware manufacturers but nowadays it is not uncommon to see brands outside eSports industry sponsoring events, leagues or tournaments.

The Finnish eSports scene has taken steps towards professionalism in the last couple of years. The same trends are being seen in Finnish eSports; brands outside the industry sponsoring events, traditional sports teams establishing or collaborating teams and educational institutions starting to offer eSports as part of education. The international success of Finnish players and teams has greatly increased the visibility and awareness of eSports in Finland.