The possible effects of Brexit to airline operations 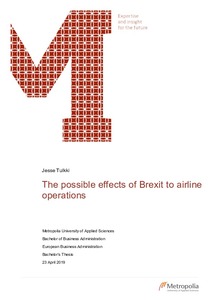 Tulkki, Jesse
All rights reserved. This publication is copyrighted. You may download, display and print it for Your own personal use. Commercial use is prohibited.
Näytä kaikki kuvailutiedot
Julkaisun pysyvä osoite on
http://urn.fi/URN:NBN:fi:amk-2019052511882

This bachelor’s thesis researches the possible effects of Brexit to airline’s operations by focusing to three main operational process; flying, ground and service operations. To understand better the possible effects, the processes are studied through two case airlines, EasyJet and Finnair. The two case airlines represent two different business models, as EasyJet can be categorized as a low-cost airline and Finnair as a legacy airline. The geographical locations of the case airlines also differ as EasyJet is headquartered in United Kingdom and Finnair in Finland.

To examine the possible effects of Brexit, the following research question was defined to outline the direction of the study: How might the Brexit effect to airlines operational processes, discussion with case airlines Finnair and EasyJet? The secondary data analysis of airline operations, operational processes and Brexit was carried out through various different techniques. The variables of European Aviation Safety Agency, Civil Aviation Authority, European Union and United Kingdom were also considered.