Analysis of malware - the Morris Worm 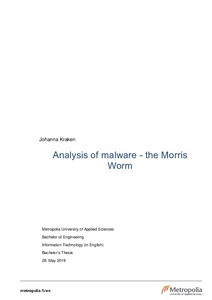 Kraken, Johanna
All rights reserved. This publication is copyrighted. You may download, display and print it for Your own personal use. Commercial use is prohibited.
Näytä kaikki kuvailutiedot
Julkaisun pysyvä osoite on
https://urn.fi/URN:NBN:fi:amk-2019052913047

It has always been necessary to secure your personal information. This has become all the more necessary since the Internet has become obsolete as people have begun to steal these and other data through the internet or by other means.

This thesis deals with the different types of malware and their history. There are three differ-ent kinds that are further discussed here. The first one is the virus and the second is the worm. The largest different between them is that the Virus needs a user to activate and the worm can spread itself. The last one is the Trojan. That is a program that hides inside a legal program.

In addition, the Morris Worm is analyzed and its consequences are shown. The Worm was programmed by Robert Tappan Morris, but did not want to cause any damage. The Worm sent a message to an IP-address and cracked passwords of the computer on which it was. The cracked passwords were only saved in the code of the virus and not sent to someone. Mr Morris made a mistake that led to multiple infected computers that decelerated and to non-responsive servers. Mr. Morris was sentenced to do 400 hours of community service and to pay over 10.050 US Dollar. In addition, he got three years of probation.