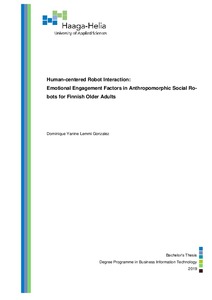 Lemmi, Dominique
All rights reserved. This publication is copyrighted. You may download, display and print it for Your own personal use. Commercial use is prohibited.
Näytä kaikki kuvailutiedot
Julkaisun pysyvä osoite on
http://urn.fi/URN:NBN:fi:amk-2019052913277

Social robots are expected to have an important role in Finnish older adults’ everyday life nevertheless, some of the future challenges are represented by social human robot interaction and integration of user needs.

The main findings of this study revealed that emotional engagement in anthropomorphic social robots refers to users´ affect and emotions in terms of happiness, interest, curiosity and trust. Trust contributes significantly to emotional engagement. Additionally, the gender of the robot has no effect on participants in terms of trust or emotions elicited by the robot in the participant.

User study and controlled experiment presented discrepancies in terms of trust towards the robot and emotions elicited by the robot in the users. This finding represents evidence that user experience methodologies need to be integrated in human robot interaction.