Installing and Commissioning MCS Over an LTE -system 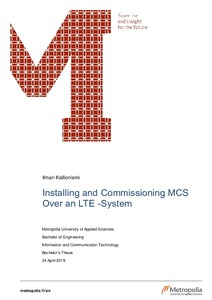 Kallioniemi, Ilmari
All rights reserved. This publication is copyrighted. You may download, display and print it for Your own personal use. Commercial use is prohibited.
Näytä kaikki kuvailutiedot
Julkaisun pysyvä osoite on
http://urn.fi/URN:NBN:fi:amk-2019053013448

The purpose of this thesis was to study the concept of system providing mission critical services over LTE or other cellular networks, compare the system to TETRA network and install the system. The thesis also goes through the different deployment options. Those options are local, public and private cloud deployments. Unlike traditional TETRA, or similar public safety radio systems, LTE has the benefits of much higher bandwidth, such as being able to transmit live video, or transfer files.

The system was installed on top of the VMWare ESXi 6.5 type 1 hypervisor as a local installation, meaning that all the aspects of the server, hypervisor and infrastructure had to be installed from scratch. The locally installed system was connected to a public network, where it could communicate with the end devices connected over LTE.

After a few hiccups, the system installation was proven to be working successfully with our own tests inside the same network, and over commercial LTE, which was the main goal of the installation. Live video, data and location information was transmitted well over the net-work

In conclusion, the benefits outweigh the negative aspects of using LTE in public safety. It is very useful to have higher bandwidth for public safety applications. With LTE, transferring of data is faster, and live video is possible. LTE also enables other applications which could be installed to next generation terminals, like almost instantaneous ID checking, or AI applications from video and audio feed.