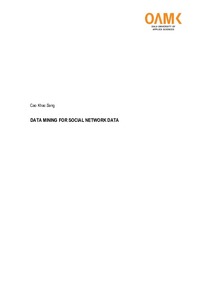 Cao, Khac Sang
All rights reserved. This publication is copyrighted. You may download, display and print it for Your own personal use. Commercial use is prohibited.
Näytä kaikki kuvailutiedot
Julkaisun pysyvä osoite on
http://urn.fi/URN:NBN:fi:amk-2019053113917

Today, people are possessing huge databases whose potentials have not been fully exploited. In particular, the development of information technology and the application of information technology in many fields have made that data treasure increase rapidly. Besides, social networks, such as Facebook, Twitter and Instagram are growing and having a great impact on social life. Typically, Twitter is a special social network where each message is sent with no more than 140 characters but having an amazing spread rate. Many of these social network users are singers, actors and especially politicians and only one of their status on social networks has an impact on real-world society. This explosion has led to an urgent need for new techniques and tools to automatically convert that huge amount of data into useful knowledge. Conducting such jobs is the process of discovering knowledge in the database, in which the data mining technology has become a current trend of information technology in the world in general. The application was created with the purpose of classifying the emotional status and discovering the main concern of a politician. The project was developed by using Python for every single task including scrapping data and analysis. In addition, the collected data was stored in the CSV format for the convenience of data visualization and analysis. The thesis will show key topics of messages that a particular politician sends to people via Twitter. The crucial part for the whole project is its source code which is taken apart in this thesis and is accessible at the following GitHub link: https://github.com/ilookforme102/bachelor_thesis