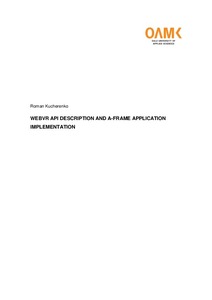 Kucherenko, Roman
All rights reserved. This publication is copyrighted. You may download, display and print it for Your own personal use. Commercial use is prohibited.
Näytä kaikki kuvailutiedot
Julkaisun pysyvä osoite on
http://urn.fi/URN:NBN:fi:amk-2019060214134

The aim of the thesis was to study and analyse the VR based technology in web browsers and define its potential in web development and Virtual Reality market. WebVR is an experimental application programming interface, which started to gain a momentum from year 2014, and it looks promising from many perspectives, such as education, design, medicine and entertainment, regarding to its simplicity from the point of applications development.

To accomplish a desired objective, WebVR API was used and tested in Chrome, Firefox and Edge browsers with VR related extensions. Other browsers such as Opera, Internet Explorer and Safari were also used in order to prove that the API is not or partly supported. The demo application was built on the 0.8.2 version of A-Frame framework based on Three.js, the Cannon.js physics library and additional A-Frame library extensions. Testing platforms were personal computers on Windows and MacOS and smartphones on Android and iOS operational systems.

As a result, the demo application demonstrates the great functionality, optimisation and relatively good performance of the WebVR API. Summarizing the gathered experience and the result, web-based VR API is dependent on a global VR market and defined by markets status.