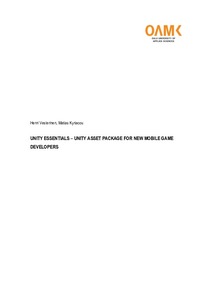 The main aim of the thesis was to hasten the game development of future Oulu Game Lab students by providing them an asset package that includes core mobile game functionalities, such as monetization, Google Play functionality and analytics. The asset package was set to be user-friendly and to include an example scene for the easy demonstration of the features of the package. The thesis was commissioned by Oulu Game Lab.

The work began by gathering background info and choosing which plugins to include in the collection. The background info comprised of several IT publications and related studies, from which the collected data was used for making educated choices in the project and to justify decisions. The project part of the work was done for the Unity engine using the C# language.

As a result of the work, a working asset package with the required example scenes was finished and can be put into use by OGL students. The usability of the asset package was tested by showcasing and instructing the use of it in a workshop directed at current OGL students. The effects of the work and its implementation by future students could not be documented in the timeframe of this work.