STUDY ON POPULATION’S ATTITUDE TOWARDS CARBON CAPTURE AND STORAGE 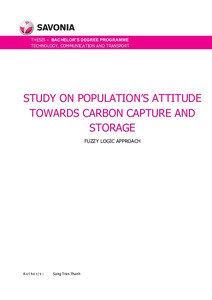 Tran Thanh, Sang
All rights reserved. This publication is copyrighted. You may download, display and print it for Your own personal use. Commercial use is prohibited.
Näytä kaikki kuvailutiedot
Julkaisun pysyvä osoite on
https://urn.fi/URN:NBN:fi:amk-2019060314304

The Earth is facing up with climate change issues due to enormous CO2 emissions, which are result of the burning of fossil fuels. There are many abatement technologies to tackle this problem and carbon capture and storage technology (CCS) is one of them. However, there are potential risks while keeping CO2 under the earth’s surface as it could leak from failure of the geological media to drinking water aquifers. Therefore, it still leaves a negative effect on the deployment of CCS which has led to Not-In-My-Backyard (NIMBY) opinions. The goal of this project was to develop a tool that can help predict the decision of citizens in the future using an artificial intelligence technique based on fuzzy logic. The data used to design the system was provided by Adjunct lecturer Eric Buah as part of his PhD project. It is an observation of 98 subjects who were observed on a hypothetical CCS project. Using this data, two fuzzy logic-based models were designed and tested by making comparison. The model does not ensure 100% correction because human-thinking is much more different from a machine and hard to predict exactly but it worked well after all as it was able to predict 60-70% correct targets compared to the original data.