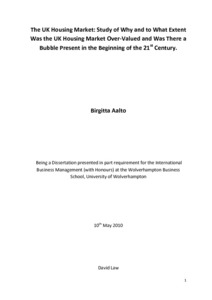 This dissertation critically examines and evaluates the UK housing market boom in the last decade. It looks at issues with the housing market in regards to demand and supply, the mortgage market and house price inflation. The main purpose of this dissertation is to determine whether there was in fact a bubble in the market and how can that bubble be determined. It also concentrates on the over-valuation of the housing market. The issues of housing markets have been widely discussed in the media and it is a common notion that house prices have been over-valued in the last few years. This study attempts to explain why the markets were over-valued and how can it be measured.

The UK housing market can be said to quite volatile which makes it vulnerable to house price
booms and busts. This volatility is mainly caused by the structure of the mortgage market. Most
of the mortgages issued in the UK are variable rate mortgages where the mortgage payments are
depended on the Bank of England’s base rate.

There are several factors that have affected house prices in the last decade and that have
contributed to the housing bubble. The demand for houses has increased enormously due to
increases in peoples’ incomes, interest rate cuts, consumer confidence, availability of mortgages,
demographic factors and unemployment. The housing supply has failed to keep up with the rapid
increase in demand which in turn led to house prices increasing rapidly as well.

The conclusions made based on the analysed literature clearly show that there was in fact a
bubble in the market and during the peak of the house prices in 2007 prices were over-valued by
31 per cent.