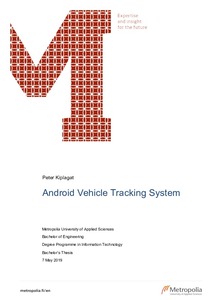 Kiplagat, Peter
All rights reserved. This publication is copyrighted. You may download, display and print it for Your own personal use. Commercial use is prohibited.
Näytä kaikki kuvailutiedot
Julkaisun pysyvä osoite on
http://urn.fi/URN:NBN:fi:amk-2019060314419

This project was conducted for a small logistic company co-owned by the author and partners, and the purpose was to build an Android vehicle tracking system to be used as a tool for tracking of the company’s vehicles. The initial implementation as outline in this report was only limited to real-time tracking as a foundation to adding more features in the future.

The mobile application was developed in Android Studio IDE using the Java programming language, while the tracking device was built from the Arduino Uno and SIM808 GSM/GPS/BT shield. Firebase Realtime database was used as a database server, and PHP was used as a script language to setup the proxy server in the Metropolia school server.

The implementation results were satisfactory with a functioning vehicle tracking system. The tracking device was capable of tracking the vehicle’s speed and location and successfully sending it to a database server while the Android mobile application was capable of communicating with the server and displaying the GPS data on the device’s google maps.

The developed tracking system can be used effectively to track the company’s vehicles. However, it still needs more optimization and additional features to get excellent tracking information. The product is yet to receive feedback from the other partners, but notable future development would be to study how to improve the map representation on the mobile application.