Photoresist thickness examination in photolithography in the manufacturing of transparent displays 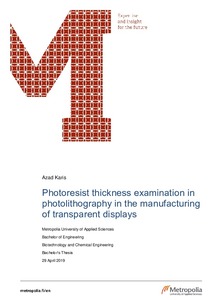 The goal of this thesis project was to examine whether it is possible to coat a thinner photo-resist layer than the one used in the current photolithography process, and to optimize the parameters of the spray coating system. This project was done for Beneq Oy, which is specialized in manufacturing transparent Lumineq displays.
The experimental part of this project mostly concentrated on performing tests of different thickness coated photoresist layers necessary for protecting the aluminum oxide layer during the etching process. Two series of tests with two different photoresist viscosities were conducted and the thickness of the coated layers was examined. The quality of the aluminum oxide layer was inspected after the etching process. The current coated photoresist layer could successfully be decreased by approximately 38 %. Testing with two different dilutions, the role of the solvent was also better understood. Thinner photoresist films were achieved using spray coating with the photoresist of low viscosity and resulted in fewer cavities in the aluminum oxide layer than of higher viscosity.
The optimization of the spray coating system was done using Design of Experiments (DOE) method. In the DOE, a full factorial two-level design was created and performed to evaluate the effects of the factors on the final thickness of the coated photoresist layer. On the basis of the generated model, the speed of the substrates passing in the coating system can be increased by 80 %. More tests should be done to further increase the functionality of the DOE model and the reliability and consistency of the experimental photoresist layer.
The decrease in the thickness of the photoresist layer and the parameter optimization of the spray coating system will result in faster production times, material saving and set potential for further development and investigation for other photolithography process steps. Photoresist coating is the first step in the photolithography process.