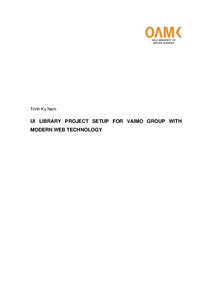 The library, which is the Vaimo UI library, set PWA (Progressive Web App) technology as a base, along with some modern Web tools/frameworks/libraries such as ReactJs, GraphQL, etc… and built on top of a usual Magento 2 (version higher than 2.3) framework. The library consisted of some general and reusable components for other Progressive Web App to start with in the future.

Throughout the thesis document, project Meka, one of Vaimo’s current ecommerce store project would be served as the showcase of the Vaimo UI library usage. The Meka project aimed to simplify the user experience and increase conversion rates with a new design and performance functionalities that are taken from the benefit of using the general Vaimo UI library. Expected end-results and methods of execution for building the UI library would be collected and described as detailed as possible. To be able to setup the Vaimo UI library, a solid understanding of Magento 2 architecture and ReactJs best practices were required, followed with hundreds hours of researching, documenting, and discussion with participating developers on how the library structured and functioned to become an elegant, small, simple and reusable library that focus on the Progressive Web App technology and its benefits.

At the end of the project, a base setup of the Vaimo PWA UI library was ready, components could be composed in the Meka project, and best practices in Magento 2 implementation towards PWA were concluded and documented on Vaimo’s Confluence Page.