Digital Amnesia and Personal Dependency in Smart Devices: A Challenge for AI 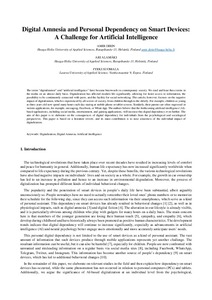 Harri Ketamo & Petra O´Rourke
Satakunta University of Applied Sciences
All rights reserved. This publication is copyrighted. You may download, display and print it for Your own personal use. Commercial use is prohibited.
Näytä kaikki kuvailutiedot
Julkaisun pysyvä osoite on
https://urn.fi/URN:NBN:fi-fe2019052817630

The terms “digitalization” and “artificial intelligence” have become buzzwords in contemporary society. We read and hear these terms in the media on an almost daily basis. Digitalization has affected modern life significantly, allowing for faster access to information, the possibility to be continuously connected with peers, and the facility for social networking. This article, however, focuses on the negative impact of digitalization, which is experienced by all sectors of society, from children through to the elderly. For example, children as young as three years old now spend many hours each day staring at mobile phone or tablet screens. Similarly, their parents are often engrossed in various applications, for example, messaging, Facebook, or WhatsApp. The authors believe that the forthcoming artificial intelligence (AI)-based applications, including social media, entertainment, and gaming applications, will increase this digital dependency even further. The aim of this paper is to elaborate on the consequences of digital dependency for individuals from the psychological and sociological perspectives. This paper is based on a literature review, and its main contribution is to raise awareness of the individual impact of digitalization.