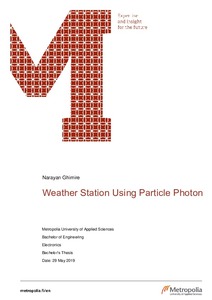 Ghimire, Narayan
All rights reserved. This publication is copyrighted. You may download, display and print it for Your own personal use. Commercial use is prohibited.
Näytä kaikki kuvailutiedot
Julkaisun pysyvä osoite on
https://urn.fi/URN:NBN:fi:amk-2019081417836

The project comprises a DHT11 as a temperature and humidity sensor, an OLED Display and a powerful Particle Photon as a fully-integrated IoT kit. The DHT11 is a digital sensor that provides the output data in a binary form. The Particle Photon has a powerful STM32 ARM Cortex M3 microcontroller as its brain and a Broadcom BCM43362 Wi-Fi chip as its connection to the internet. Hence, the device performs completely under Wi-Fi network. The IoT hardware Particle Photon has its own IoT Device Cloud and IoT Apps platforms. These IoT Cloud and IoT Apps are secure and managed platform that provides the visibility and control over the device. This feature enhances with the functionality to track and monitor the device from distance.

The DHT11 sensor reads the analog signals from the physical environment and converts those signals into digital signals. With the implementation of the application built under Particle Web IDE, those digital signals are received by the IoT Kit Particle Photon via serial communication. Then, the signals are again converted into human readable decimal numbers. Eventually, these decimal values are flashed to the OLED screen via I2C communication. These values are accessible via Particle mobile Apps and browser from all over the world.

The predetermined objective of the project was accomplished successfully. The prototype device is fully functional, accurate and reliable. The data measured by the device can be monitored remotely as expected.