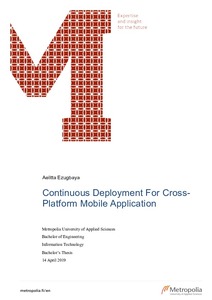 Ezugbaya, Aelitta
All rights reserved. This publication is copyrighted. You may download, display and print it for Your own personal use. Commercial use is prohibited.
Näytä kaikki kuvailutiedot
Julkaisun pysyvä osoite on
http://urn.fi/URN:NBN:fi:amk-2019082417959

The CD pipeline deploys the app to three release environments: Alpha, Beta, and Production. Both iOS and Android apps are deployed to different release platforms because the Android can be deployed to different release environment within one native Play Market store, while Apple does not provide such services, so third-party solutions have to be used.

The thesis describes modern tools and services for creating and improving the CD pipeline. The biggest part of the paper is about the implementation process of the CD. It describes in detail iOS and Android signing process, the alpha, beta and production deployment, iOS and Android app building and aspects of using tools and services for CD pipeline.