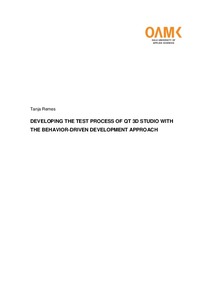 Remes, Tanja
All rights reserved. This publication is copyrighted. You may download, display and print it for Your own personal use. Commercial use is prohibited.
Näytä kaikki kuvailutiedot
Julkaisun pysyvä osoite on
https://urn.fi/URN:NBN:fi:amk-2019090318140

The objective of this thesis was to study whether the Behavior-Driven Development (BDD) approach would benefit the test process of Qt 3D Studio. The work was commissioned by The Qt Company.

The thesis work was done around the development cycle of the 2.4 release of Qt 3D Studio, which began at the beginning of April 2019 and ended on June 28, 2019. The work was started by studying the Behavior-Driven Development approach and examining the development and test processes of Qt 3D Studio. The BDD approach was then experimented by implementing a new automated BDD test for Qt 3D Studio. The gained experiences were analysed and compared with those from the previously used method.