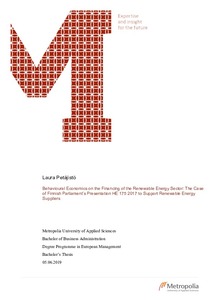 Petäjistö, Laura
All rights reserved. This publication is copyrighted. You may download, display and print it for Your own personal use. Commercial use is prohibited.
Näytä kaikki kuvailutiedot
Julkaisun pysyvä osoite on
http://urn.fi/URN:NBN:fi:amk-2019092519267

Climate targets are key political subjects, thus renewable energy operators have a significant role. Finland’s government has committed to the Paris climate agreement of keeping temperature rise below 2 Celsius to pre-industrial levels and the European Union has set a target at decarbonizing the economy by 2050. Finland’s individual goal is to cover 50% of its energy demand by renewable energy by 2020.

Behavioural economics has been studied since the 18th century with key findings on institutional herding resulting from asymmetric information, information cascades, reputational reasons and purely psychological factors such as from the impact of availability and preference for conformity. Institutional herding has mainly been studied through commercial institutions, hence this research has studied governmental funding. The purpose of the research is both to understand better what drives governmental renewable energy funding and to provide further information on ongoing behavioural economics studies. The most valuable gain is acquiring a deeper understanding on whether the Finland’s new funding methods support the set climate targets and understand which pitfalls should be avoided in order to create future schemes, which would support the set targets.

The research resulted in finding high levels of governmental level herding in terms of tender schemes in order to fund renewable energy. Evidence for both rational and spurious herding was found. Governments share mutual information on price savings, technology development and on strategies to achieve climate goals and utilize the recommendations of the same international networks such as OECD, but also evidence for spurious herding was detected as the tender schemes are mainly suited for big investors and market disturbances cannot be covered through tenders, which both suggest that the tender scheme does not fully serve the initial climate target, but rather indicates irrational herd behaviour.