Differences in the consumption of confectionery products in Russia, England and Finland from the perspective of marketing mix 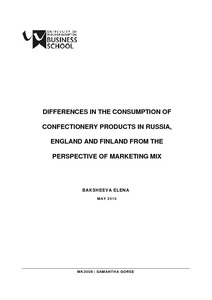 This study researched the consumption of the confectionary products from the perspective of Marketing Mix, by investigating the cross-cultural responses from Finland, England and Russia. It tested the differences and resemblances in the consumer behaviour in three different countries, which relied on the primary and secondary data. The results showed the characteristics of non-dynamic standardisation of the marketing mix in each of the country. The study illustrated more dissimilar than similar situation in the confectionary industry in Finland, England and Russia, which has a great influence on the consumption behaviour.