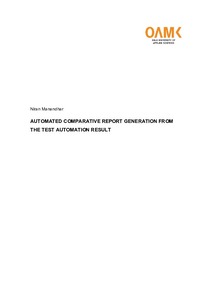 Manandhar, Niran
All rights reserved. This publication is copyrighted. You may download, display and print it for Your own personal use. Commercial use is prohibited.
Näytä kaikki kuvailutiedot
Julkaisun pysyvä osoite on
http://urn.fi/URN:NBN:fi:amk-2019092919372

This thesis was a development project commissioned by Profilence Oy for creating a web application. The application required to show an Automated comparative report from the company’s pre-existing software Tau.
The aim of this thesis was to get the test automation results from Tau efficiently and make a web application from the retrieved data. The web application needed to provide users with a dashboard that had a comparative report generator. The application processed the analytical data from physical test stations connected to a data server and from the devices which were already deployed and used by a testing team.
During the thesis, many new user interfaces for the user were created. The user interfaces and new features were added to the Tau web application. The new features and user interface was successfully used to create automated comparative report from test automation results.
The development was done by using Angular (version 6 and above), with UI library: Primeng and customized charting library: Highcharts. The primary testing browsers were Google Chrome and Firefox. Most of the data coming from Database from Tau was managed as JSON (JavaScript Object Notation) and protocol buffers. The application had a responsive view which could be viewed on a larger display such as a big screen or smaller tablets and pc as required by developers and stakeholders.