Chinese Dream? Opportunities of and Barriers to the Chinese Film Market 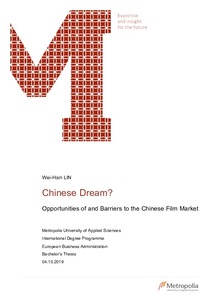 Lin, Wei-Hsin
All rights reserved. This publication is copyrighted. You may download, display and print it for Your own personal use. Commercial use is prohibited.
Näytä kaikki kuvailutiedot
Julkaisun pysyvä osoite on
http://urn.fi/URN:NBN:fi:amk-2019100419562

The economic growth of China in the recent decade has made China one of the world’s most important economies. Its large population, along with increasing purchasing power as a result of economic growth, also makes China a promising country for foreign filmmakers pursuing profitability of their films. However, foreign film entry into the Chinese market might not be as easy as it seems, as witnessed in the ban of movies Christopher Robin (2018) and Parasite (2019) for speculated reasons. As a matter of fact, international trade in films has long been controversial. The purpose of this thesis is therefore to firstly find out what are the characteristics of films that make international trade in films difficult and secondly to map the opportunities of and the barriers to the Chinese film market.

The author finds that the dual nature of films—as economic commodities and cultural goods—has made international trade in films controversial and difficult, which could be already seen in a series of negotiations within the WTO regime between pro-trade and pro-culture countries. In the case of China, although its film market may look appealing to foreign filmmakers for profitability, such appealing market cannot be accessed until overcoming various hurdles set by the ‘gatekeeper’—the Chinese government. These hurdles include content censorship, import quota, short notice window and blackout period. In addition, the film regulatory authority can remove a given foreign film under ‘special circumstances’ even after the given film has successfully entered the Chinese market. Among all these hurdles, content censorship remains unchallenged and may be the most difficult hurdle for foreign filmmakers to overcome, as it affects all entry modes available for foreign filmmakers and the recent development shows no sign of loosening but strengthening of content censorship. It is therefore recommended to take a comprehensive look into economic potential, barriers before and after film entry, as well as additional costs/risks before engaging in any of the film entry modes.