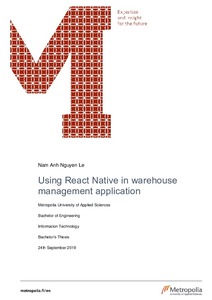 The topic of this report is “The usage of React Native in managing and operating the system in Logistic Industry”. This thesis is going to introduce the fundamentals of Mobile Development and Logistic Industry. Furthermore, the problems and challenges in this business will be presented along with the solution when using React Native. With the new features and the capability of integration of new technologies, React Native can be used effectively in improving warehouse management systems performance.

Inheriting from Javascript, one of the most well-known programming languages, React Native was developed by Facebook company for implementing cross-platform application in both Android and iOS devices. React Native has a similar concept with React, the web development tool; but instead of using web components for developing the user interfaces, React Native uses the built-in native components for the mobile platforms. After being released in 2015, both React and React Native have gained popularity among software and mobile community, and they are being used in a wide range of areas of daily life, especially in Logistics and Warehouse Industry.

A mobile application is going to be developed and launched using React Native for idea.invest, a Logistics and Software Solutions company in Hamburg, Germany.