Ethical and legal dimensions of microtransactions in videogames 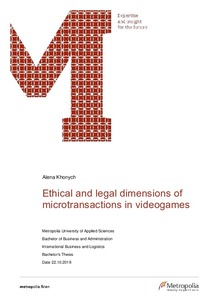 Khonych, Alena
All rights reserved. This publication is copyrighted. You may download, display and print it for Your own personal use. Commercial use is prohibited.
Näytä kaikki kuvailutiedot
Julkaisun pysyvä osoite on
http://urn.fi/URN:NBN:fi:amk-2019111120952

The paper analyses the phenomenon of microtransactions, traces its roots and focuses on the possible effects on the consumers of gaming industry. There are many aspects that should be taken into consideration while discussing this topic. It also became obvious, that some sort of a solution to the growing problem needs to be found.

The results indicate that microtransactions are an important and powerful tool revenue generating for gaming companies. It also became obvious that certain types of microtransactions started to resemble an unsupervised form of gambling. The possible solution to the situation would be first recognizing these microtransactions as gambling and then implementing tools to officially regulate them. Although some countries managed to achieve some results, many others are still struggling trying to protect the consumers.