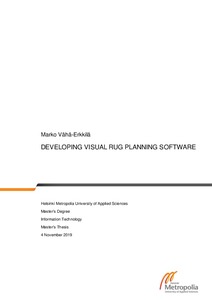 Vähä-Erkkilä, Marko
All rights reserved. This publication is copyrighted. You may download, display and print it for Your own personal use. Commercial use is prohibited.
Näytä kaikki kuvailutiedot
Julkaisun pysyvä osoite on
http://urn.fi/URN:NBN:fi:amk-2019111321081

The purpose of this study was to continue the software development started in my bachelor’s thesis. Developing the first version of Ryijytin software started over a decade ago to assist in the design of Finnish ryijy (rug). The focus of my bachelor’s thesis in 2007, was to test whether computer software could produce artistic content when producing a Finnish ryijy. The first version of the Ryijytin software was therefore a prototype to test the hypothesis. As a conclusion it was possible to use a computer software to assist the design of the ryijy and produce an accurate design when compared to the original picture to the final ready-made ryijy. The software development continued after that with incremental builds to create a design aid not only for professionals but also to hobbyists and beginners.


The programming in the project was done with free Java Standard Edition, using JDK versions 5, 6, 7 and 8 and with NetBeans Integrated Development Environment. For the Ryijytin software version 2.0 development an Open JDK 12 and Apache NetBeans IDE 11 were selected.

The Software development was broken into modules and for testing several finished ryijy were produced in different states of the development of the software. Based on the success of the first version of the Ryijytin software, it is possible to design a Finnish ryijy using a computer software. The added features in version 2.0 further increased the usability of the software. New and improved features make the design and editing of pre-calculated work charts even more flawless and easy. Designing and editing are easy with an intuitive and simple to use graphical user interface. As the software grow into a point where it was impossible to improve any further, Java evolved and Java libraries used in the project got deprecated or obsolete, a need for next software version came imminent. This study gives guidelines for next version of the Ryijytin software.

The success of the Ryijytin software has kept itself waiting. A long development process and working as sole entrepreneur has stalled the success of the project as well as poor marketing. This thesis also discusses potential marketing strategies and designed new service concept as a resolution.