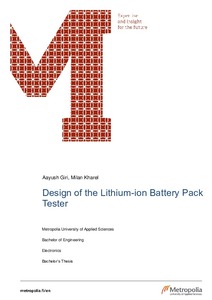 
Giri, Aayush
Kharel, Milan
All rights reserved. This publication is copyrighted. You may download, display and print it for Your own personal use. Commercial use is prohibited.
Näytä kaikki kuvailutiedot
Julkaisun pysyvä osoite on
http://urn.fi/URN:NBN:fi:amk-2019112121849

The goal of the work was to study several evaluation boards from Linear Technology and use them to design a simple Lithium-ion battery test system. A detailed study on them was done along with the search for new design components to achieve the main objective.

The main motive behind this study was to test the given sets of batteries under several circumstances and study their behavior. Initially, the project was carried out using a charging board, buck converter, battery stack monitor, and an advanced microcontroller called Linduino One, all designed by Linear Technology. The supervisor handed all of these mentioned modules in advance. However, the defect and malfunctioning of the buck converter led to rethinking and formulating a new plan with different components to obtain the final goal. Thus, a separate method was implemented using a simple charging module called TP4056, some relay switches, and an Arduino UNO. A simple circuitry and codings were sufficient to yield the desired results.

The final product can successfully test two battery cells simultaneously through numerous cycles. With Arduino UNO and the right coding, the data generations on the state of charge (SOC) of the cells, time taken to complete one cycle, measured voltages, cell capacity, currents, etc are generated flawlessly throughout the operations. The tester has a benefit over commercial products for small-scale operations and to the hobbyists. This method can be used easily to determine the different conditions of Lithium-ion batteries. However, there is room for improvement and upgrade to the system to achieve the capacity of being able to test a battery pack containing more than two individual cells.