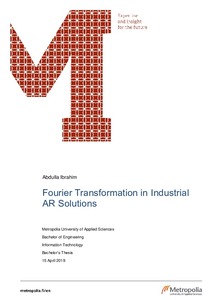 Ibrahim, Abdulla
All rights reserved. This publication is copyrighted. You may download, display and print it for Your own personal use. Commercial use is prohibited.
Näytä kaikki kuvailutiedot
Julkaisun pysyvä osoite on
https://urn.fi/URN:NBN:fi:amk-2019112221906

Until recently, augmented reality was not used in industries. However, its benefits are becoming more obvious for many applications. Lighting Systems typically deploy various sensors and devices to automatically control the lighting environment. These devices need to be set up and sometimes maintained to keep the lighting system functioning in the best possible manner.

Searching for devices is usually the most time-consuming phase during the commissioning process but, AR has multiple benefits, amongst which is Increasing the work efficiency as it can reduce the time the common and repetitive processes take. The objective of the thesis is to propose and develop an application that can improve the commissioning and maintenance processes and speed it up.

By creating an AR application and by applying the Fourier transform, a faster method was proposed to detect, track and setup multiple luminaires. This resulted in an AR lighting commissioning and setup tool that was faster than the traditional approach. Despite the challenges that were faced during the development of this solution, it can be stated that the suggested method and its outcome reinforce the notion that augmented reality, and particularly Fourier transform, has demonstrable potential.