Smart contract – A promising use case for the adoption of blockchain 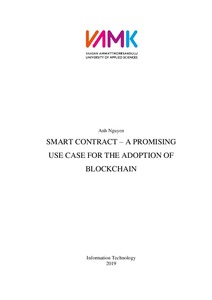 Nguyen, Anh
All rights reserved. This publication is copyrighted. You may download, display and print it for Your own personal use. Commercial use is prohibited.
Näytä kaikki kuvailutiedot
Julkaisun pysyvä osoite on
http://urn.fi/URN:NBN:fi:amk-2019113023687

Blockchain has been around for over a decade, however, the technology does not seem to have been adopted after a long time being in existence. The goal of this thesis was to get to study what are the barriers of the blockchain adoption. Furthermore, the thesis also indicated one use case that seems to stand out from the rest, smart contract, by implementing one specific example for demonstration purpose.
The thesis went through an in-depth concept of blockchain technology, studied the most well-known use cases being, including cryptocurrency, initial coin offering and smart contract and figured out their limitations particularly and blockchain’s generally. Finally, one example of Ethereum smart contract was implemented to indicate how this particular use case could fit what is needed nowadays.
As a result, the studies showed that blockchain is promising and can be applied through developing decentralized applications by smart contracts but the use cases must be chosen very carefully due to the problems of privacy and data protection. Otherwise, the main obstacle for the adoption is the lack of serious regulations, resulting the lack of trust, therefore, as long as blockchain-related businesses are not clearly regulated, the mass adoption is probably still far away since no one gets fully protected in the game, neither the companies nor the customers.