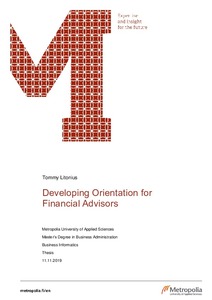 Litonius, Tommy
All rights reserved. This publication is copyrighted. You may download, display and print it for Your own personal use. Commercial use is prohibited.
Näytä kaikki kuvailutiedot
Julkaisun pysyvä osoite on
https://urn.fi/URN:NBN:fi:amk-2019112923499

The objective of this Master’s thesis was to develop the current orientation process for financial advisors at the target company, which is a large Scandinavian agent in the financial industry.

The target company’s orientation process was restructured recently and as a result the effectiveness of the orientation had deteriorated. The aim of the research was to identify which areas of the process were in most acute need of improvements and what actions could be done in order to develop the current orientation of the financial advisors.

The research approach used in the thesis was action research and the strategy implemented was a qualitative research method. Data was collected through interviews and the method was semi-structured. All the chosen interviewees worked within the company and in positions that were found to be most suitable to advance the research.

The key finding of the research was that the various areas of the orientation were neither well-structured nor connected to each other. Based on the findings from the interviews as well as information gathered from the literature research, a thirteen-step action plan was designed for the company. All the steps in the action plan were created to provide structure in the orientation process.

The proposed action plan was presented to and validated by the target company. The orientation process of the financial advisors is currently under review and it is possible that several of the development ideas will be incorporated into the future orientation model.