Will a self-organising team need a leader? : Case: A German start-up company 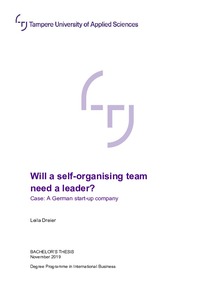 Dreier, Leila
All rights reserved. This publication is copyrighted. You may download, display and print it for Your own personal use. Commercial use is prohibited.
Näytä kaikki kuvailutiedot
Julkaisun pysyvä osoite on
http://urn.fi/URN:NBN:fi:amk-2019113023695

This thesis was written in cooperation with a start-up online marketing company located in Germany. This company decided to implement a self-organising structure for the US teams starting in January 2020. The studied team was working independently until a team leader joined in January 2019. The performance of the team improved once the team leader joined the team. The purpose of the case study was to find out whether leadership would be beneficial to a self-organising team.

The research aimed to help the studied team evaluate the possibility of leadership to the new team structure. The results can be beneficial to the studied team, and the recommendations suggested can be tested as well. The data was collected through five personal interviews with the studied team. The interviews aimed to collect personal opinions of the team members excluding the team leader. The results of the interviews provided data on how a leader can lead their team once transitioning to a self-organising structure. The data was analysed with the theoretical part of the thesis that included previous studies on the topic of leadership, leadership styles, self-managing teams and leading a self-managing-teams.The results of the study showed that the majority of the respondents believed leader- ship could be beneficial in certain areas for the team such as directing the focus of the team to the bigger picture, and providing tools, feedback that can facilitate the work of the team. On the other hand, the results also showed that leadership can hinder a self-organising team, if a leader takes sole ownership of the decision making or the task delegation. The findings suggested further research on whether a leader is beneficial to a self-organising team, and this secondary re- search can be done once the self-organising structure is implemented and put to practice. Due to the time constraints of the thesis, there was not enough time to research the studied team once transitioning to a self-organising team. The aim of the second research is to further evaluate the respondents’ perception of the effectiveness of leadership on a self-organising team.