Declining Performance of the Tea Estates; Factor Analysis and Accomplishment. 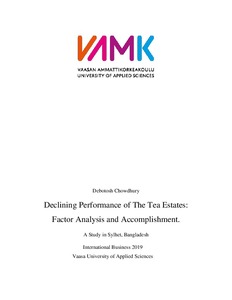 Chowdhury, Debotosh
All rights reserved. This publication is copyrighted. You may download, display and print it for Your own personal use. Commercial use is prohibited.
Näytä kaikki kuvailutiedot
Julkaisun pysyvä osoite on
https://urn.fi/URN:NBN:fi:amk-2019120424651

The survey examines the factors behind the decreasing performance of the tea industry of Bangladesh in the Sylhet district. The analysis has been concluded through a productivity analysis of the companies. The actual scenario of the tea industry has also been examined. A total of five tea companies and ten tea estates (two from each tea company) were selected for the study. Primary data were collected through a survey of both the supervisors of the company and managers of the tea estates. The collected data were analyzed using mean, percentage, productivity and trend analysis. It was found that tea companies are suffering from capital shortage, lack of modern technology adaptation, lack of expert labor and lack of government back-up. Climate change is also playing a remarkable role. Though the production of tea is increasing, it is not enough even for the local nor the domestic consumers. The study has concluded that government support and adaptation to new technologies and methods may change the whole scenario sooner or later. The respondents’ evaluation shows the reliability and the assurance of the decrease in the performance of tea estates in Bangladesh. Here, the tea industry is one of the key factors that influences the economy of Bangladesh. It is considered as one of the most important economic products in the economy of Bangladesh nowadays.