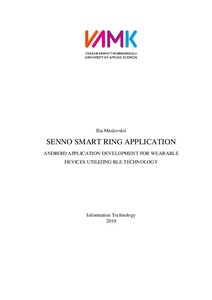 In recent years, with increasing sophistication of smartphones and the advent of wearable electronics, it has become easier to have a healthier lifestyle by being conscious of constant changes in your body. However, despite a plethora of de-vices which provide limited health monitoring capabilities, few allow for more than a few of relevant readings, and the devices are either imprecise, obtrusive or not easy to use.
The objective of the thesis was to develop a companion application to the Senno Ring, a device which provides non-intrusive health monitoring using LED tech-nologies. The end goal of the application was to avoid common pitfalls of the competitors, while having modern design, providing ease of use and allowing for clear visualization and interpretation of the data transmitted by the ring.
The application was implemented primarily by using Java and Android-specific frameworks, excluding BLE data transfer, which was built on RxJava2. The data is collected in the Firebase Cloud services for storage, ease of access and further analysis, using NoSQL Database Structure.
The thesis was done for Delektre Ltd., to coincide with the release of the Senno ring prototype. During the thesis work, prototype application with core functional-ity was successfully developed, with it being ready for deployment on devices running Android 4.0 and higher.