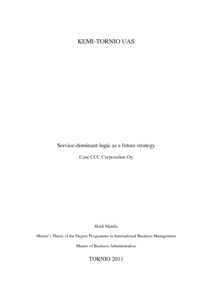 Qualitative study is the chosen research method for this thesis. Semi-structured interviews and document review are used as data gathering techniques. Interviews concerned managers in different operational areas of the case company, to gain a broader view on the subject. Theoretical framework and discussions concentrate on the service-dominant logic, its key concepts value and service and on competence domains.

A cyclic pattern between service-dominant logic, service-orientation and customer-orientation was discovered and the importance of the logic for the software business was recognised. Competence discussion derived from the discussion in project-based companies and the foundational principles of service-dominant logic. Different organisational and individual competences were defined as demands of the logic.