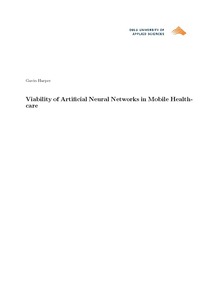 This thesis describes the design process of an artificially intelligent algorithm capable of differentiating between two discrete electrocardiogram readings (a signal depicting the electrical activity of the heart at a given point in time). The paper culminates in a reduced form implementation of one such algorithm utilising the neural computing paradigm. Algorithms implemented under the neural computing paradigm mimic the as currently perceived operation of the brain cells known as neurons. By creating a network of nodes (neurons) and altering the connections between them, an algorithm can display rudimentary forms of what may be classified as intelligence by displaying an ability to recognise patterns in data and adapt to better recall those patterns.

The theoretical section of this paper discusses first those concepts of electrocardiography that directly relate to the research in this paper. The remainder of the theoretical section is dedicated to neural computing. By reading this paper, a reader not previously familiar with the subject should understand the various factions of the artificial intelligence com- munity and both the operation and purpose of neural computing and what role it may potentially play in future mobile healthcare developments.