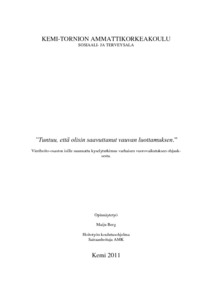 Father is as important in the child's life as mother. Being a father can however be diffi-cult as the child already has a mother, who seems to have natural skills in caring for the child. Due to this, the fathers often require support and guidance for the early reciproci-cal interaction. The guidance has a vital part in supporting the early father-child rela-tionship and the guidance is significant professional task in healthcare.

Purpose of this research is to describe the experiences of fathers about the support they have received from the Oulu University Hospital ward 13 for building up their interac-tion with their babies. The target group consists of the fathers in the familyroom or the regular wardroom that have just had their first baby. The goal of this research is to de-velop the means of supporting interaction between father and the baby.

The research is quantitative as it reaches a large target group quickly to describe their experiences. The material was gathered with a structured form that included three open questions among others. The query was conducted in September and October of 2010. 100 queries were dealt out. 37 queries were returned. Answering percent are 37. Study material was analyzed with SPSS-program. Open questions was opened with inductive content analysis.

From research results it can be deducted, it is necessary to direct the guidance at ante-natal wards more towards the fathers. The best way to achieve this appears to be to guide the father in handy-skills such as bathing, holding the baby. The worst is to try to guide the father in to interaction with the baby such as the forming of eye-contact and responding to the baby's moods. The visiting hours were shown in the research to be a major distraction in the familiarization between the father and the child as well as the fathers' participation in the guidance.