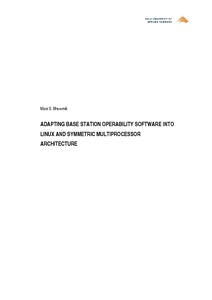 Operation and maintenance (O&M) is an application domain in the Base Transceiver Station (BTS) system. At Nokia Siemens Networks (NSN), BTS O&M Software (SW) is developed using IBM Rational Rhapsody (C++). BTS O&M SW supports the multiprocessing architecture to some extent and is mostly designed for the OSE real-time operating system that allows the best effort scheduling to be used. BTS O&M SW is not hard real time software that has to be immediately responsive to triggers, but is expected to behave deterministically in any suitable platform. The software consists of several functional subsystems with active and reactive object(s) which are executed as processes. Rhapsody Unified Modeling Language (UML) event based communication between those active and reactive objects keep BTS O&M functionality alive. BTS O&M SW mainly follows the priority based scheduling as offered by Operating System Embedded (OSE). A scheduling problem was observed when O&M SW had been ported into the Linux operating system. Unlike OSE, Linux provides a fairness-based heuristic scheduling which emphasizes the synchronizing or timing problem in existing O&M SW. This led to the birth of this thesis “Adapting Base Station Operability Software into Linux and Symmetric Multiprocessor Architecture”.
The main purpose of this thesis is to study the synchronization problems discovered during the porting work and make the BTS O&M SW independent of scheduling, so that it can run on OSE and Linux as well as other similar symmetric multiprocessor architecture. Addressing the performance problems of O&M SW in Linux and OSE are also part of this thesis. The work includes problem study, searching for solutions, implementation and/or recommending the best solution for BTS O&M SW.
The work is done as refactoring of BTS O&M code. It is divided into development time and runtime refactoring. While the development time refactoring physically divides the code into well distinguished domains and interfaces; the runtime refactoring takes care of the scheduling, synchronization and performance problems. Runtime refactoring is the primary focus area in this work.