Similarity Analysis Between Groups of Construction Objects in BIM Application 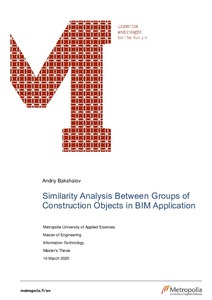 Bakshalov, Andriy
All rights reserved. This publication is copyrighted. You may download, display and print it for Your own personal use. Commercial use is prohibited.
Näytä kaikki kuvailutiedot
Julkaisun pysyvä osoite on
http://urn.fi/URN:NBN:fi:amk-202003103255

This thesis explores possibilities of using similarity to create a new connection between a set of construction objects from previously finished projects in a Building Information Modelling software called Tekla Structures.

For all the construction processes a connection is one of the most important things that keep different construction objects connected. There are different existing solutions provided by the software, but the benefits to users are limited and a lot of time during project development is spent on designing connections. To find a better solution that would save time and effort for the users this study focuses on finding out if similarity from the previous projects could benefit users in their future projects.

To find answer to this problem a functional prototype was developed that would collect and analyse existing project connections and using different techniques to find out what would be a best suggestion for a new connection between selected set of construction objects in Tekla Structures software.

The results of this study show how the developed prototype performed with the selected model used for the testing. Overall outcomes were satisfactory, showing promising results, but at the same time not all the test cases passed as expected, leaving possibility for a future improvement and development that are described in conclusions.