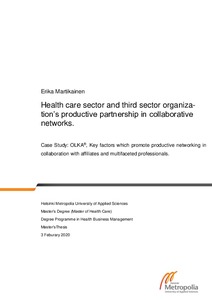 The purpose of the study was to discover perceptions of productive networking and to gain a holistic view of beliefs and motivations towards productive networking behavior. The study was conducted in cooperation with OLKA®, which is a branded model name, and their key partners. The aim of the study is to identify the current organizational purpose of OLKA and their networking capabilities, also to appraise which networking characteristics collaborating partners see as productive networking. The result derived from this study are to assist OLKA to further facilitate their internal effective networking behavior, along with sharing the results with collaborative partners. The individuals interviewed consisted of OLKA representatives and affiliated peer support organizations. The case study was conducted by using qualitative research methodology, to understand the perceptions of what makes networking productive. Primary data was collected by doing telephone interviews. The data analysis process of the study was performed by using content analysis.

It was determined that interviewees perceived that the strength that comes with teamwork was the core reason for networking. Goal and purpose oriented driven organizations promote networking behavior with strategic leadership behavior, creation of something new, continuous goal awareness and, the ability to seek out a relationship that promotes the agenda. Through the data obtained in this investigation it was seen that OLKA representatives and partners thoughts on this concept were convergent. Opinions expressed contained statements about supporting education, management's commitment, personal pledge and self-direction. Both OLKA representatives and OLKA partners expressed that their organizations internal visibility was increased through their networking and participation in community activities.